Situated just half a kilometre west of the village of Newmarket-on-Fergus stands the beautiful Parish Church of Kilnasoolagh. A place of tranquility, set aside for the worship of God for over seven centuries. There has been Christian worship on this site since 1256 or even before. It is recorded in Vatican papers that a priest named “Peter” was in charge of the parish at this time.

The present building was built in 1815 by a prominent ecclesial builder James Pain, it being a reconstruction of a previous church built in 1686 by Sir Donough O’Brien of nearby Dromoland Castle. This in turn replaced another building or buildings used for worship at Kilnasoolagh over the centuries. Indeed, the entrance gate arch may be the remnants of an early building at Kilnasoolagh.

The church which is still in use today, is constructed of limestone and is handsomely proportioned, seating approximately 100 people. At the west end of the building is the recently reconstructed belfry and spire in which the entry door is situated. This reconstruction was necessary because the spire was destroyed by lightening in November 1991. Due to roof damage, the slates and timbers were also replaced at this time.

When entering the church one is struck by the number of monuments or memorials and stained glass windows which adorn the building. These were lovingly presented by the family of deceased members in memoriam, and are a constant reminder of those who gave of their time and energy to the church. One in particular is of note, that of Sir Donough O’Brien installed after his death in 1717. William Kidwell, a noted English sculptor of the time, carved this large baroque monument. It depicts Sir Donough reclining on a mattress while resting his elbow on a pillow. Two cherubs hold back a veil to give the reclining figure a glimpse of heaven while a third cherub beckons the onlooker to read his epitaph which is written in Latin. 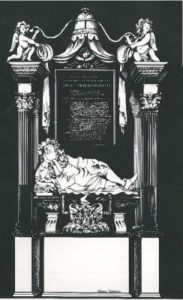